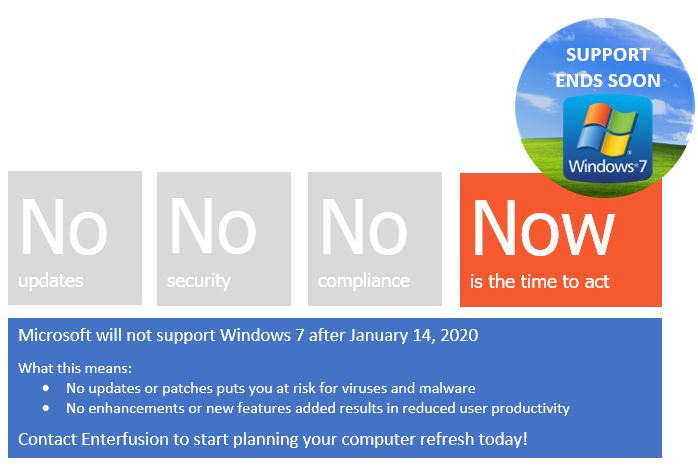 Microsoft’s Windows 7 Operating System (OS) will reach End of Support on January 14, 2020. This means no updates, no patches for security vulnerabilities, no feature enhancements, and should you have any issues, Microsoft will not offer support. As a result, using this –or any unsupported OS– leaves your business vulnerable to attack and exploitation, not to mention lost user productivity. To put it simply, any computer still running Windows 7 in January 2020 will be at risk. Thankfully, there are several solutions to this.

If you are using a workstation running Windows 7, here are your options:

Since support will end on the same day for everyone, there could be a delay for those waiting till the last minute to transition. Start planning your transition now to avoid delays. In December 2018, Enterfusion sent out a list to all clients of workstations still running Windows 7 with individual recommendations for each affected workstation. If you are not sure whether your computer was on that list, you can reach out to your IT Coordinator to find out. If you are not currently an Enterfusion client but would like help with the Windows 7 transition, you can reach out to us by filling out this contact form.

Other Microsoft End of Support Dates

Below is a complete list of announced Microsoft End of Support dates.